Like many who’ve been sequestered at home –  four weeks for Californians – I’ve  been staggered by the scope of this crisis, and dragged myself into uber-anxious foraging for information.

Venturing out for a walk or bike ride, I give wide berth to those without masks, wondering if they will remain in denial until they are infected, and will never know (care?) how many they’ve infected.

A Dutch study determined that the ‘slipstream’ of potential virus-bearing droplets from people walking, running, or biking is frighteningly longer than the six-feet social-distancing guideline when standing in place. Sobering stuff – how much we share without realizing it.

Makeup has become irrelevant for many women. We’ll find out if we like our hair longer. We’re practicing better hygiene habits and getting proficient with Zoom.

The State of California is finding a way to house its urban refugees (aka unhoused aka homeless) by buying up hotels to house them – at least in the short term – finally embracing the only intelligent way to end homelessness – by housing people.

Perhaps we’re finding we don’t need to keep so many people in overcrowded prisons.

Corporations are opening their wallets – at least in their public promotions –­ to bring basic resources to communities in need. (Why was this hard to manage in the past, when the poor were left to their own devices?)

The Mafia in Sicily is providing free food to residents.

Animals are touring their own zoos, and wild creatures are showing up in neighborhoods with no traffic. 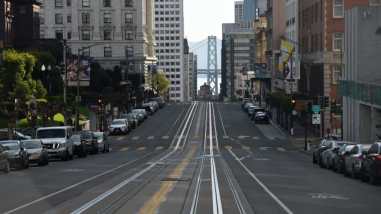 No way around the fact that this will be a long epidemic and we will lose a lot of people.

Such crises, also bring out the worst  behavior.  Snarky politicians surface to foist their small-minded agendas on citizens, no matter who suffers. For example:

A federal appeals court just ruled that Texas may enforce a near-total statewide abortion ban for as long as the coronavirus pandemic lasts.  They won’t have to suffer what women do when they live an unwanted pregnancy though to the end

Cities are recording substantial increases in domestic violence, as dysfunctional families are forced to be together. Many feminists are calling this the shadow pandemic. And where is the money to support outreach and women’s shelters?

And, this being America, gun sales are setting records.

I harbor a gloating wish that 3M will be stuck with the millions of masks they could not deliver before we shifted to DIY with t-shirts and cloth napkins and bandanas.

Arundhati Roy suggests this pandemic is a portal between one world and the next – a shaky new bridge between our past and our future.

Our social and economic systems are being altered forever, and some of them deserve to die. Like commuting habits that pollute the air we breathe;  like using more clean water than we can reasonable expect to have access to in the future; like tolerating vast unhealthy food production and distribution systems – and that’s just scratching the surface of our collective aggressions on the planet.

Why would we want to drag those messes forward?

Rather, we can set down these burdensome ways, marshal our ingenuity, and rebuild a more balanced world, a place we finally will defend from our own worst impulses.